From This Land Minecraft Server
Jump to navigation Jump to search

The Great Entity Teleport Disaster of 2015 was an admin error which occurred on the 15th of November 2015 and resulted in every loaded entity in the map being teleported to a single location without warning.

Admin Cassolotl was moving a teleport block for Jazzable. Jazzable initially had a pair of teleport blocks which connected Sea Trees to their base, but wanted these moved to connect their base directly to their allotment at Zero Zero. This process resulted in there being a command block at Sea Trees which technically should have been removed (since it had been replaced with an equivalent block at Jazzable's base).

However, Cassolotl suggested leaving the block where it was and possibly giving it a new command, because it was "an interesting place to have an immovable teleport block" (high above sea level in an ocean biome). Jazzable suggested finding a command which was able to teleport animals and not just players, because there were lots of animals at Sea Trees for players to take but transporting them was difficult. Cassolotl looked for commands and chose @e, believing it would target any entity, and therefore would teleport the animal or player closest to the block. In fact, @e targets all entities. 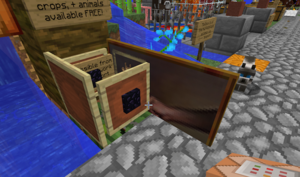 After Cassolotl entered the command, Jazzable placed a button on the block and pressed it to test the new teleport. This executed the command, which caused all loaded entities in the world to be simultaneously teleported to the target location (Jazzable's allotment at Zero Zero). This included:

Cassolotl was in creative mode, as is needed to set commands in command blocks. Dozens of mobs were in the same space, and it was impossible to see anything. They flew to find out what was going on. Within seconds, all of the survival players were killed by the hostile mobs.

Immediately after the disaster, there was discussion of resetting the server to a point before it happened. But there was no reliable backup in place beforehand, so this was not possible. Cassolotl quickly destroyed the offending teleport block. 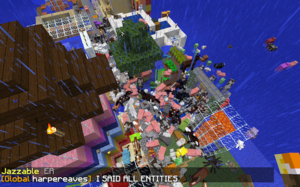 "I SAID ALL ENTITIES!" --then harpereaves

The huge number of mobs at Zero Zero caused massive lag and swarmed the area of the allotments. There was debate among the online players over how to deal with this. Jazzable suggested immediately killing all of the animals, but LadyGeek26 had ethical objections. Eventually a compromise was reached, with easily bred farm animals (sheep, cows, pigs, chickens) slaughtered, but the more valuable horses rescued and put in a temporary pen at the centre of Zero Zero.

fallerOfFalls was able to replace all the item frames at their automated marketplace with no major difficulty. Many players suffered from inventory losses when they were killed - Cassolotl was quick to replace everything. They also compensated all affected players with a mooshroom spawn egg each.

Over the following days, the mobs at Zero Zero were gradually cleared. LadyGeek26 brought some of the rescued horses back to Sea Trees via the nether, and the rest were taken to Iroengine's community farm.

There's a boat sitting on the roof of Subzero that we suspect ended up there after the teleport disaster. Actually the one there now is a replica; someone removed it, and Cassian missed it so someone else put a boat up there and rotated it to a comforting angle.

Retrieved from "https://thisland.miraheze.org/w/index.php?title=Great_Entity_Teleport_Disaster_of_2015&oldid=92"
Categories:
Cookies help us deliver our services. By using our services, you agree to our use of cookies.